Update February 2013 from Dr Norman: Death due to Sensipar. We have said Sensipar is dangerous for many years and have seen many people made sick by Sensipar (Cinicalcet). Yet Amgen (and the biased endocrinologists who are on their payroll to do Sensipar research) keep trying to find ways to sell this drug. This month (February 2013) the FDA told Amgen to stop Sensipar research immediately after a 14 year old was killed by this drug. I could have operated on that 14 year old and removed the parathyroid tumor and cured the patient forever with an operation that took 15-20 minutes. But instead, Amgen wants to get rich by giving an expensive drug (for 50 years??) to a teenager. These people don't need Sensipar to make them sick and kill them, they need a talented surgeon to remove their tumor and send them home for lunch. Read about the death here.

Sensipar (cinacalcet) should not be used for high blood calcium
caused by primary hyperparathyroidism.

If you are on this page of parathyroid.com because you have hyperparathyroidism and your doctor gave you a prescription for Sensipar and you came home and typed "Sensipar" into Google... then you are on the right web site... However, you may want to read about hyperparathyroidism and parathyroid disease at the beginning of this website and then come back here later. Make sure you understand that taking a pill will not make the tumor in your neck go away. Also, be careful, this is an advanced page and we will confuse you if you haven't read more about parathyroid disease on our other pages first. 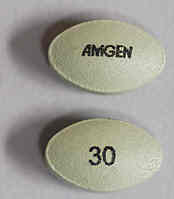 Several studies of Sensipar were conducted in patients with PRIMARY hyperparathyroidism in the past few years (mid 2000's). Patients with primary hyperparathyroidism were given Sensipar and the doctors measured their calcium levels and PTH levels. The biggest study had a total of 40 (forty) patients getting Sensipar, while 38 got placebo (not a very big study, was it?). The trial was to last 1 year. Only 28 of the 40 patients taking Sensipar (70%) were able to stay on the drug for one year--the rest got sick and were not able to take it. Of the 28 patients that took the drug for one year, 73% had a decrease in their blood calcium levels. Only 7% of patients had a decrease in their PTH values. All the patients still had the parathyroid tumor still in their neck, and even in patients who had lower calcium levels, when the drug was stopped, their calcium and PTH levels went back up--some even higher than before. The researchers did uncover a potential problem, however, that the bones of these people may not be any better, and they may be worse. This paper can be read here: Peacock M, Bilezikian JP, et al. Cinicalcet maintains long-term normocalcemia in patients with primary hyperparathyroidism. J Clin Endocrinol Metab. 2005;90:135-141.

This was a well conducted study (and paid for by Amgen of course), and like other smaller studies (yep, even fewer patients also paid for by Amgen), it shows that Sensipar will decrease the blood calcium in about 3/4 of patients. However, since the PTH doesn't go down in most people, it seems that the patient's bones are still exposed to excess PTH. The evidence is that even though the calcium goes down, it often CAUSES kidney failure and often makes osteoporosis WORSE. What is most important, is that at least 40% of people can't even take this drug because it makes them feel very sick (nauseated). See our publication below: Sensipar makes people worse, not better!

Our Experience With Sensipar and Primary Hyperparathyroidism.

We consult on nearly 3500 patients with PRIMARY hyperparathyroidism annually (we do not see patients with secondary hyperparathyroidism who are on dialysis). We have tried Sensipar quite a few times in the past for patients who were operated on somewhere else who we could not operate on, in order to see if the drug would make them feel better. We have also seen hundreds of people referred to us over the years who have been put on this drug because their doctor said that "surgery was too dangerous", or because the local surgeon tried to operate and couldn't find the tumor.

Now, in 2013 our opinion is clear: Sensipar is a drug that hurts people, makes them feel bad, and has no role in patients with primary hyperparathyroidism. We call Sensipar "the devil's drug", as it does nothing, makes people sick, decreases kidney function, and causes osteoporosis to become worse. All this for $650 per month!

In 2012 the FDA approved Sensipar for use in primary hyperparathyroidism for patients who were "too sick to undergo surgery".  Folks, we've done more than 20,000 parathyroid operations and have NEVER seen a patient that is too sick to have surgery. If they can eat breakfast, they are healthy enough to have a mini-parathyroid operation. Heck, once the tumor is out they are healthier almost immediately since their heart will beat better and stronger within hours of tumor removal. There is no such thing as a patient who is too sick for parathyroid surgery. Even if there were, giving a drug to make them feel bad is clearly NOT in their best interest. Nothing good will happen by taking Sensipar except that the calcium level will drop. The PTH level will remain high and the patients will become sicker, not better.

This is a big pharma company (Amgen) who wants to make money selling a drug that kills people and does not make them feel better. Our advice: spend 20 minutes with an expert parathyroid surgeon and get the damn tumor removed. There is no other disease that is so easy to cure!

Our experiences with this drug are very poor, and we have written the FDA and Amgen to make them aware of our findings... the abstract of our findings were presented at the biggest endocrine meeting in 2010: and then published in 2012:

Cinacalcet (Sensipar) provides no measurable clinical benefits for patients with primary hyperparathyroidism and significantly accelerates bone loss with prolonged use.

Introduction: Cinacalcet (Sensipar) has been shown to decrease calcium levels in patients with primary hyperparathyroidism (PHPT) in several small trials, however no other endpoints have been studied and long-term effects are not known.

Methods: 90 patients began Cinacalcet as an alternative to surgery for PHPT. Patients filled out a symptom questionnaire specific for PHPT. All had bone density DEXA scans before treatment and annually. All patients were followed as long as the drug was tolerated or until complications arose, at which time all underwent minimally invasive parathyroidectomy. Starting dose was 30mg/d and increased to 60 to 90mg/d as necessary. Serum calcium and PTH levels were studied at 3-4 month intervals. Symptom resolution was tracked.

Conclusion: Although Cinacalcet will cause intermittent reductions in serum calcium in patients with PHPT, this provides symptom relief in almost none. Prolonged use of Cinacalcet is associated with significant bone loss that is accelerated over bone loss seen in untreated PHPT patients. There appears to be no role for Cinacalcet in the treatment of PHPT; patients are better off with no treatment. Surgery remains the best choice for these patients.

Sensipar and Primary Hyperparathyroidism... What is the Bottom Line?

This drug will cost you between $620 and $1250 per month in the US. Most insurances will not pay it... and they should not. It is in your best interest to find an excellent parathyroid surgeon and get the parathyroid tumor removed. It can be done in less than 20 minutes by some experts... then get on with your life.