Hypercalcemia is the medical word for “high blood calcium.” It is almost never normal and almost always requires further testing and often treatment of the underlying problem to bring the high blood calcium back into the normal range. Hypercalcemia should not be ignored or just “monitored” because it typically means bad things are on the way. Calcium is one of the most important minerals in your body that serves many functions and thus it needs to be kept in a very tight range – you don’t want too little OR too much of it. Because a normal blood calcium is required for good health, the measurement of blood calcium levels is part of the standard blood tests when patients have an annual checkup, or go to the doctor (or emergency room) when feeling ill. When your doctor orders routine blood tests, calcium is usually part of the standard panel (it’s in the Basic Metabolic Panel, one of the most common blood tests).

What Physicians Need to Know About Hypercalcemia

Many physicians end up on this page after searching "hypercalcemia" online. The most important thing for doctors to know is that hypercalcemia is almost never caused by cancer in the ambulatory patient. If you have a patient in your office that isn't dying of cancer (that you have already known about for months or years), then the hypercalcemia is almost always due (over 99%) to primary hyperparathyroidism. Cancers do not present with high calcium--in fact, very few cancers are ever associated with high blood calcium, and when they are, the patient is already in the hospital (in the ICU?) and end-of-life preparations have been ongoing for months. An ambulatory patient with hypercalcemia does NOT need any form of cancer work up. They do not need a CT scan, MRI scan, PET scan or even a chest-x-ray to "rule out" cancer. Virtually every patient in every doctors office (even an oncologist's office) with hypercalcemia should be presumed to have hyperparathyroidism and tests run to confirm this diagnosis outlined on our Parathyroid Advanced Diagnosis page. There is a lot of very valuable information for doctors and patients further down on this current page, so keep reading.

Hypercalcemia vs. Normal Calcium Levels Will Change According to your Age

Most labs will give a normal calcium range from about 8.8 to 10.5 mg/dl. But this doesn’t mean that this is a normal range for everyone – it depends on your age (we have a calculator for you further down on this page). A value of 10.5 in a teenager is perfectly normal, but 10.5 in adult over age 35 is too high – this is hypercalcemia. The graph below shows the normal range of blood calcium in green and you can see that it changes as we get older. Teenagers and young adults can have normal calcium levels up into the mid 10s (mg/dl). But adults over the age of about 35 should have lower calcium levels, not going above 10.0 mg/dl. (NOTE: Canadian and European version of this graph is at the bottom of this page). Adult calcium levels usually range somewhere between 9.0 and 10.0 mg/dl, which is why we like to say that “adults live in the 9s”. It is typically not normal for adults to have frequent or persistent calcium levels in the 10s.

Hypercalcemia Calculator: Calculate the Upper Limit of Blood Calcium for your Age

Enter your age and our calculator will give the upper limit of normal calcium for you.

The upper limit of calcium varies with age with teenagers having the highest levels and adults over 50 having the lowest. Unfortunately, most labs don't give the upper limit of normal according to your age, so we have made this calculator for you. Note that blood calcium is measured differently in different parts of the world. Just as we measure distance in feet and miles in the USA, while other countries use meters and kilometers; in the USA we measure calcium with the units mg/dl while most other countries use the units mmol/L. The units your lab uses will be printed right next to your results. 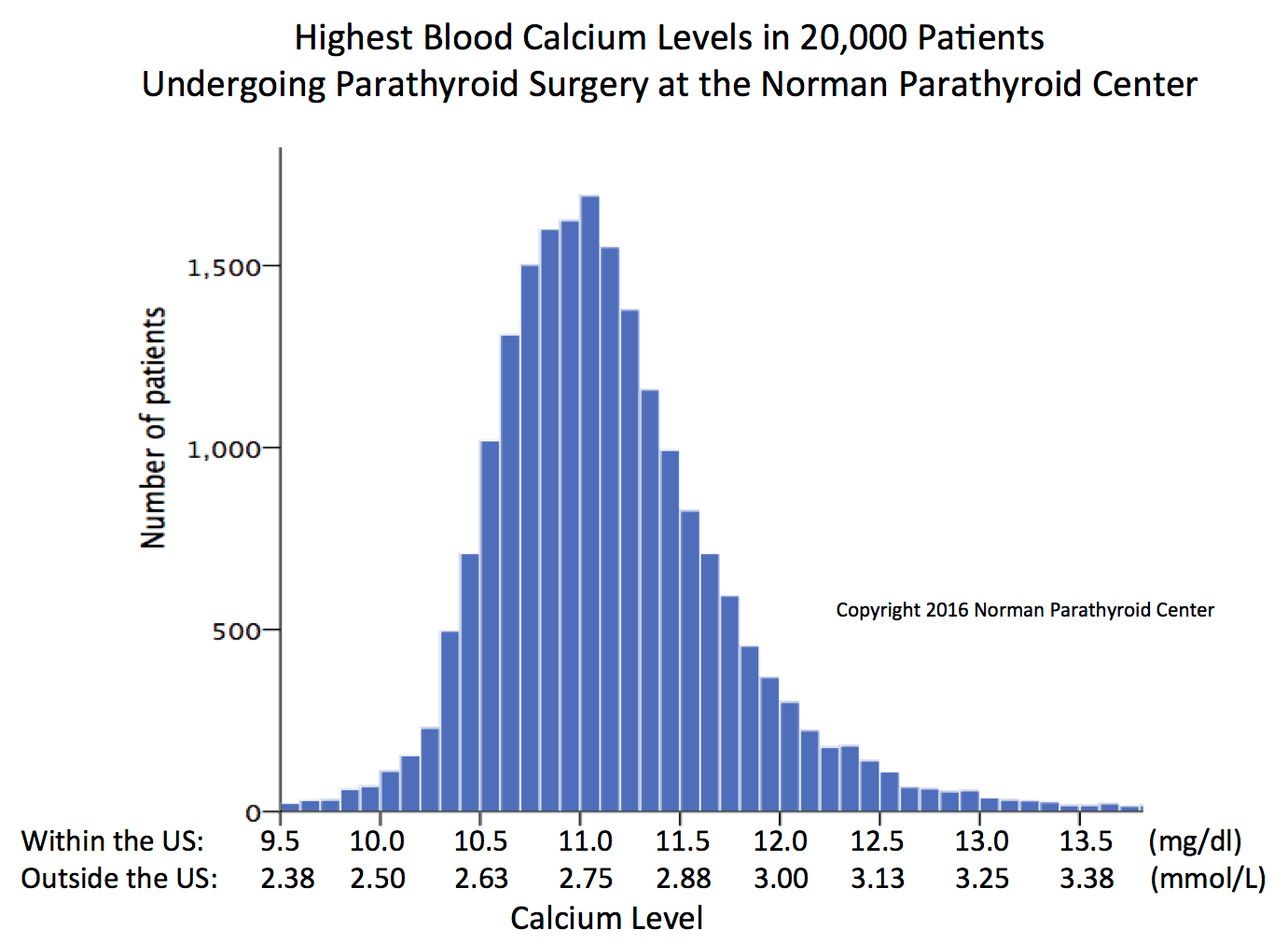 What’s wrong with hypercalcemia? Don’t I need lots of calcium for my bones?

Hypercalcemia is not good, and actually, can be quite bad for you. It is now known that even mild elevations in blood calcium (mild hypercalcemia) can be very detrimental to your overall health over time. The high blood calcium can cause many problems with many different parts of the body, but it also makes people feel bad.

Hypercalcemia will cause symptoms in almost everyone. The most common symptoms of hypercalcemia are chronic fatigue, lack of energy, loss of interest in things you used to enjoy, "brain fog" or difficulty concentrating, and trouble with sleep. It also causes kidney stones, heartburn or gastric reflux (GERD), headaches, depression, high blood pressure, palpitations or cardiac arrhythmias, and chronic kidney failure. And because calcium is coming out of your bones, it causes a loss in bone density, leading to osteopenia and osteoporosis. Hypercalcemia can make you miserable. The most popular page of this large website is the Symptoms of Hyperparathyroidism page.

Here is the most important thing to know about the symptoms of hypercalcemia: they are NOT correlated with how high the calcium is. That is, someone with only a slightly high calcium can feel just as bad as someone with a much higher blood calcium level, and they will have the same chances of getting all of the complications. Some doctors out there do not know this! In medical school they were taught that the calcium level determined how bad the disease was, so a mild hypercalcemia meant a mild disease and worse hypercalcemia meant worse problems. In treating tens of thousands of patients with hyperparathyroidism, we know this is not true. Mild hypercalcemia is just as bad as more pronounced hypercalcemia. This is illustrated very nicely in the graph below where we looked at over 20,000 patients operated on for hyperparathyroidism and hypercalcemia. It shows that people with only mild elevations of blood calcium (between 10 and 11 mg/dl) have just as many symptoms and complications from the high calcium as people with much higher calcium levels (above 11.1 mg/dl). 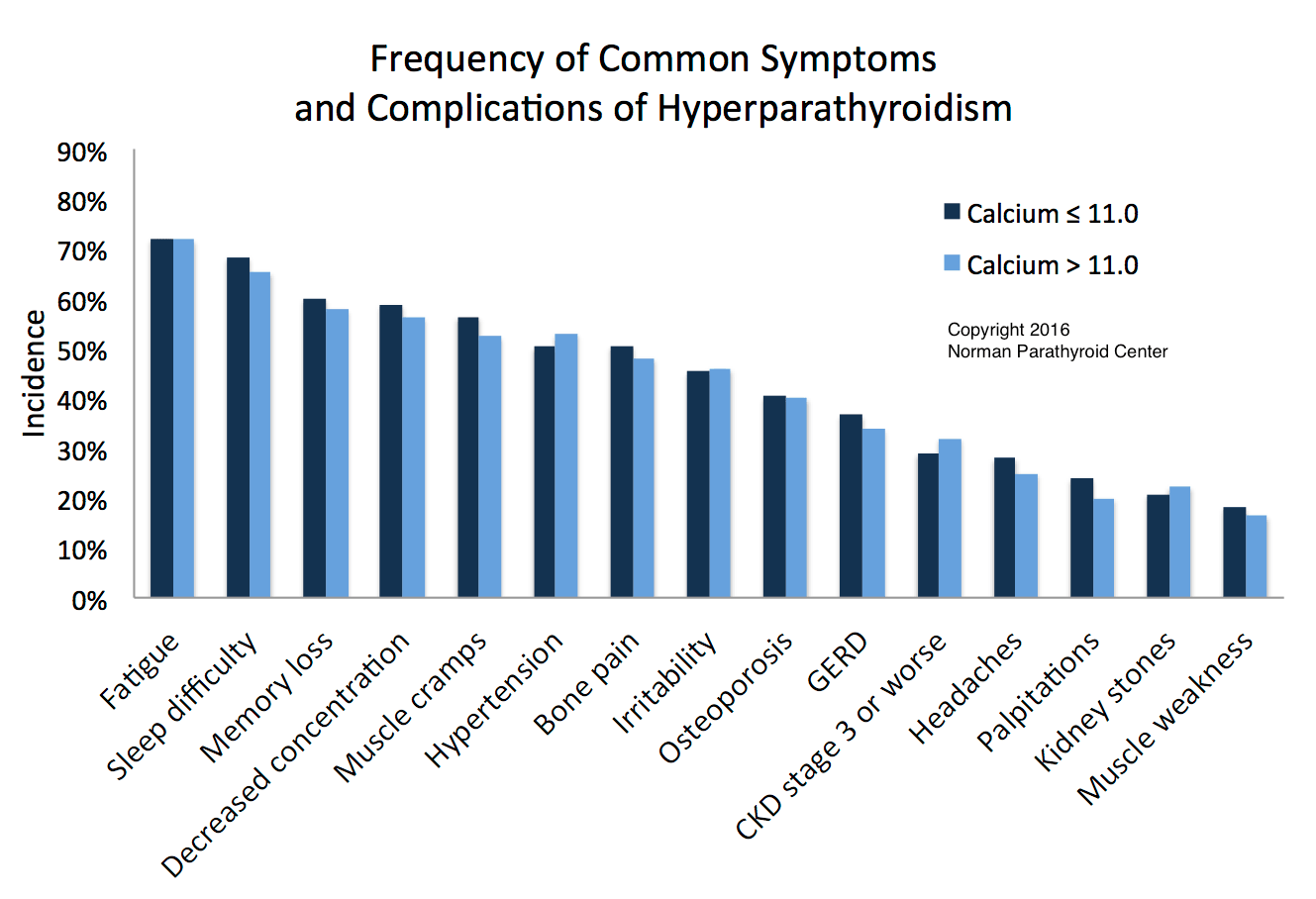 Hypercalcemia complications develop over time. Thus the severity of hypercalcemia is related to how long you have calcium levels that are high, not how high it has become. A calcium of 10.5 is just as dangerous as a calcium of 11.5. Even "mild" hypercalcemia will lead to many other health problems if left untreated. It is the duration of hypercalcemia that matters, not the height of the calcium!

Since hypercalcemia is almost always due to a parathyroid tumor, and there are no medications that can treat this – the treatment is to remove the tumor. Fortunately, parathyroid surgery is curative and can be done in a minimally invasive outpatient operation. Removing the parathyroid tumor is the only way to cure almost every case of hypercalcemia.

Everyone with primary hyperparathyroidism is a candidate for this operation. As mentioned above, even “mild” hypercalcemia will lead to problems if left untreated. There is no reason to wait for these complications to occur. Get the tumor out of your neck before it does damage! Read some of our patient testimonials to learn about how this simple operation can be life-changing.