It is important to note that the two main tests used to "find" the parathyroid gland are not on this list. Sestamibi scans and ultrasound scans can be used to help a surgeon find the tumor, but under no circumstances are positive scans required in order for a mini-parathyroid operation to be performed.

The answer is EXPERIENCE. Dr Norman performed his 15,000th parathyroid operation in early 2011. There is no other human alive that has done 1000 parathyroid operations. This doesn't mean there aren't some really good parathyroid surgeons in the US, because there are. However when we look back at our practice we can see the evolution of how we perform this operation. We were the developers of mini-parathyroid surgery in the early 1990's. We invented the radioguided approach. We were the first to publish a trial using scopes to perform parathyroid surgery. We were the driving force behind out-patient parathyroid surgery (sending the patient home an hour or so after the operation). We were the one of the first to use local anesthesia (now we know this is stupid). BUT, during our first 1,500 or so patients we required a positive scan before we would attempt a mini-parathyroid operation. Just as nearly all surgeons currently do, we would tell patients that if their sestamibi scan was negative they were not a candidate for a mini-parathyroid operation. In the meantime, we performed thousands more of these operations and by the time we had done a little more than 3,000 we had developed more techniques and tricks that allowed us to perform mini-parathyroid surgery on all patients except those that weighed more than 250 pounds. A few thousand more patients and we learned enough that we now do mini-surgery even in the biggest morbidly obese patients. It simply doesn't matter if you have one bad gland, or 4 bad glands, we do a nearly identical operation, therefore we do NOT require the scan to be positive.  Again, we couldn't care less what your scan shows. If you have primary hyperparathyroidism we should be able to cure you with a near 100% cure rate and a near zero complication rate, in about 20 minutes, through a 1 inch incision (less than 220 pounds), and have you go home in about 1.5 hours. We average 12 parathyroid operations daily, if even one of them took 4-5 hours we'd never get to go home.

There are some other minor issues which allow some surgeons to perform more mini-parathyroid operations, such as anesthesia and the nuclear medicine team. Some surgeons who work at teaching hospitals will also have residents (student physicians) perform your anesthesia. This isn't necessarily bad, but it is clearly not as fast and efficient as it could be if the anesthesia was given by somebody that does this every day. We use the same anesthesia team for thousands of cases and they know exactly how to handle parathyroid patients. When you chose a surgeon, you chose his entire team. Do your homework and chose a surgeon who is confident. If you ask your surgeon how many cases he performs, and he doesn't want to answer you, then be careful. If he combines thyroid and parathyroid surgery together into one number, then make him break it down. If he won't look you in the eye when you ask him tough questions, then beware. Of course, this is not just for parathyroid surgery... but for all surgeons. 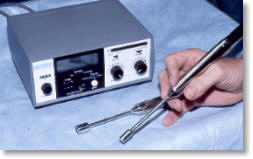 Probe used to find over active parathyroid gland for radioguided parathyroid surgery Surgeons are funny people. They wear their personalities on their sleeves. You should watch your surgeon and his confidence. Does he say "this is simple and I can fix this easily"?  Or, do they want to order a bunch of tests and scans prior to seeing you? Do they want "another" scan? Do they want to stick needles into your neck? Do they say they may need to make the incision bigger? Do they say you may need to spend the night? (we haven't had somebody stay the night in well over 8,000 cases). Do you think you know more about some aspects of this disease than your surgeon? Pick your surgeon wisely. Some are great. Most are not.  Be smart!