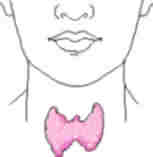 Technically speaking, (stick with us here for just a minute) the four parathyroids arise from the third and forth branchial pouches. This means that they are formed early in embryogenesis along with other organs of the neck. The lower 2 parathyroids come from the third brachial pouch which is also responsible for producing the thymus gland (not thyroid) which is important for the development of a normal immune system. The thymus eventually sits behind the breast bone (sternum). The upper 2 parathyroids come from the fourth branchial pouch which also produces the thyroid gland.

BUT, it doesn't always go as planned !

This young patient had primary hyperparathyroidism with a very high calcium and parathyroid hormone. The sestamibi scan showed that it was completely buried within the thyroid gland and the only way to adequately get the entire adenoma out and cure her disease was to remove the right lobe of the thyroid. Her remaining thyroid (the isthmus and left lobe) will make enough thyroid hormone so she will not have to take thyroid hormone pills. Keep in mind that this situation is uncommon (about 1 percent of all cases). But your surgeon should have enough experience and knowledge to deal with these difficult circumstances should they arise. This picture was taken after the specimen was in preservatives overnight (prior to being sliced and stained by the pathologist) that is why the colors have all turned brown.

When the lower parathyroids fail to migrate normally, they can reside very high in the neck, several inches above the top of the thyroid. This is quite rare, but a very experienced surgeon should know this BEFORE they operate!! A more common parathyroid migration problem occurs when the lower parathyroids fail to separate from the thymus as the thymus makes its way to the chest to end up behind the sternum (although still uncommon, this happens in about 1% of patients with parathyroid disease). Instead of the parathyroids ending up just below the lower edge of the thyroid, they will go all the way into the chest and reside next to the heart. This picture shows just this case. There is a very "hot" parathyroid adenoma which shows up on this sestamibi scan just to the right of the patient's heart (the heart is outlined in yellow and the red arrow points to the parathyroid gland).

Once again, it is the migration of parathyroids which makes operating on them so tricky. This is one of the reasons that a number of surgeons believe that minimally invasive parathyroid surgery can be advantageous. With proper testing, a surgeon can tell BEFORE the operation where the overactive adenoma is located so so he/she doesn't have to search all areas of the neck. As discussed on a few of our other pages, sometimes these tests don't give any predictable information.  BOTTOM LINE:  An experienced surgeon can anticipate variances in anatomy before an operation.

One of the most important aspects of parathyroid surgery is that all four parathyroid glands must be examined if you expect to be cured long-term. Unfortunately, few surgeons can do this, so they rely on scans that are acurate about 70% of the time. If there is one thing that you learn from this page, it is that parathyroid gland anatomy is extremely variable and these little boogers can be located in MANY places in the neck (or chest). If there is a second thing you learn, it is that you want a surgeon who can find all four glands. Only taking out the gland that shows on a scan will mean that 30% of you will not be cured. Be smart, and keep reading!

If you like learning by watching videos, then look at the educational videos.

We are operating at full capacity, performing 70+ parathyroid operations per week. Our partners are performing 40+ thyroid cancers per week and more than 10 adrenal operations per week. We operate on patients from every state and many foreign countries just like we did prior to the pandemic (about 15 patients from other countries per week). We take special measures to make this the safest place in the world to have your parathyroid operation. We promise to take great care of you!